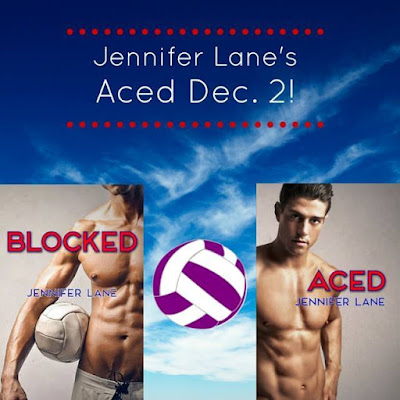 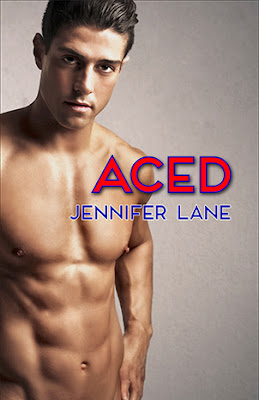 Volleyball wonder Lucia Ramirez found her love match in Blocked despite the glaring political spotlight aimed on her family. In Aced, the second book in Jennifer Lane’s Blocked series, it could be her brother Alejandro’s turn to get lucky in love.

Medical student Alejandro’s hot Latin looks get him plenty of attention, but his deep faith and admiration for his father keep him on a righteous path, with no time for something as frivolous as love. He strives to do the right thing—study diligently, take care of his siblings, represent the family well—so why does he feel so unfulfilled?

Enter Lucia’s friend and teammate Maddie Brooks, who shines at blocking the ball and acing the serve. Too bad this graduating senior isn’t so confident about her life off the court. Her longtime boyfriend has just bailed on her, and med school applications loom large. Oh, and a nerve-wracking tryout for Team USA also approaches.

Maddie meets Alejandro when he visits Lucia at school, and she’s soon drawn to his sharp mind. Alejandro is similarly intrigued by Maddie’s talent and strength. But will personal biases and family politics smother the slow burn of their attraction? Unless Maddie can learn to believe in herself, and Alejandro can become his own man, their kindling romance hardly stands a chance.

Will either of them be bold enough to try something new? Find out in this emotion-rich story that refuses to shy away from life’s hardest questions. Because love is worth the risk. 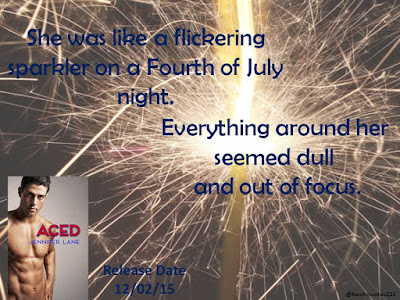 I’d only seen Alejandro on TV, but his presence seemed magnified in real life. He was Jaylon’s height but probably weighed thirty pounds less. He moved like a panther, sleek and long in a black suit “dressed down” with no tie. His short black hair shone in the arena lights, and he appeared freshly shaven. Hot damn! He sure looked more suave than any college boy I’d encountered. Was that the typical dress for medical school at Johns Hopkins? Probably not. Something told me Alex did things his own way.
As Alejandro approached, Lucia stood to hug him, shaking her head. “Hey, what’re you doing here? You didn’t tell me you were coming.”
He smiled. “Could we go somewhere to talk?”
She glanced at me. “I don’t want to leave Maddie. I dragged her here, so it’d be rude to abandon her.”
“So this is the famous Maddie.” When Alejandro reached across to shake my hand, his dark eyes burned into me. “I’ve seen you play, but it’s good to finally meet. I’ve heard great things about you.” His handshake was firm, but his hand was soft and warm, zinging a surprising thrill right through me. I realized that for at least a few moments, I hadn’t thought about Jaylon. Alejandro let go all too quickly.
His expression sobered as he looked back at Lucia. “I want to talk to you about something in private.”
She folded her arms across her chest as they both sat. “I already said no, thank you. I can’t right now.”
He frowned and squared his shoulders. Then he leaned in to Lucia’s ear and spoke to her in Spanish. She bristled next to me.
“How dare you?” she hissed.
I leaned back. What had just changed my sweet Rez into a pissy hellcat? 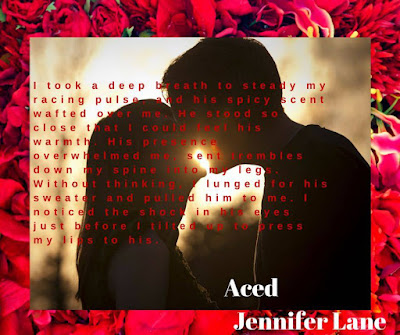 Review for Aced
Review by Gia:
Aced is a great read.  It's a  different kind of read for me.  It had romance but also hot topic issues and politics.    Aced is Maddie and Alejandro stories.  Maddie is Lucia friends and Alejandro is Lucia's brother.   I loved Maddie.  She's a really good volleyball player.  She is strong person on and off the court.  Alejandro is a head strong guy.  He has been raised by a very political family.  He has strong views on things.  He comes off as a jerk at first but he's really a good guy.
Maddie and Alejandro seem like complete opposites but they together they are great.  They both grow and learn acceptance in this story.
It's a great read.    I can't wait to read the next one, Spiked.
4 Amazeballs Stars!! 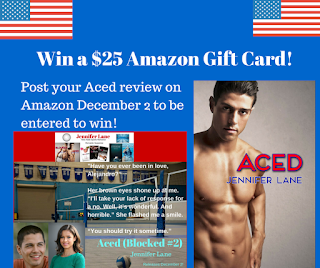 Get psyched for romance with psychologist/author (psycho author) Jennifer Lane! By day she’s a therapist, and by night she’s a writer. She can’t decide which is more fun.

Jen adores creating sporty heroines and hot heroes in her college sport romances. Volleyball wonder Lucia Ramirez found her love match in Blocked despite the glaring political spotlight aimed on her family. In Aced, the second book in the Blocked series, it’s her brother Alejandro’s turn to get lucky in love. Aced launches in December 2015.

Stories of redemption interest Jen the most, especially the healing power of love. She is also the author of The Conduct Series, a romantic-suspense trilogy that includes With Good Behavior, Bad Behavior, and On Best Behavior.

Ultimately, whether writing or reading, Jen loves stories that make her laugh and cry. In her spare time she enjoys exercising, attending book club, and visiting her sisters in Chicago and Hilton Head.